Faith in god is an aberrant belief arising out of the pressures of the class struggle. 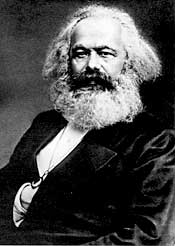 A well-developed atheistic worldview is that of Marxism/Leninism. Marxism sees religion and God as manmade institutions invented to ease emotional pain and explain life and death.

"opiate of the masses,"

in that it deadened the desire for social change in the present with a hope of heaven.

With ties by marriage to Nathan Mayer Rothschild, one of the founders of the international Rothschild family banking dynasty, it was the Rothschild family that financed in part the writing of the Communist Manifesto and the Bolshevik Revolution.

Marx argued that capitalism, like previous socioeconomic systems, will inevitably produce internal tensions which will lead to its destruction. Just as capitalism replaced feudalism, he believed socialism will, in its turn, replace capitalism, and lead to a stateless, classless society called pure communism. This would emerge after a transitional period called the "dictatorship of the proletariat": a period sometimes referred to as the "workers state" or "workers' democracy". Marx's thought demonstrates a strong influence from: Hegel's dialectical method and historical orientation.

World War I led to the Russian Revolution of 1917, in the later stages of which the Bolsheviks, led by Vladimir Lenin, took power. Marx served as a starting point for Lenin, who, together with Trotsky, always believed that the Russian revolution must become a "signal for a proletarian revolution in the West". Supporters of Trotsky argue that the failure of revolution in the West (along the lines envisaged by Marx) to come to the aid of the Russian revolution after 1917 led to the rise of Stalinism and set the cast of human history for seventy years. The Russian Revolution dynamized workers around the world into setting up their own section of the Bolsheviks' "Third International". Lenin presented himself as both the philosophical and the political heir to Marx, and developed a political program, called "Leninism" or "Bolshevism", which called for revolution organized and led by a centrally organized vanguard "Communist Party".

Under Lenin, and particularly under Joseph Stalin, Soviet suppression of the rights of individuals in the name of the struggle against capitalism, as well as Stalinist purges themselves, came (in the minds of many[weasel words]) to characterise Marxism.

In China Mao Zedong also portrayed himself as an heir to Marx, but argued that peasants — not just workers — could play leading roles in a Communist revolution, even in third-world countries marked by peasant feudalism in the absence of industrial workers. Mao termed this the New Democratic Revolution. Marxism-Leninism as espoused by Mao came to be internationally known as Maoism.

"Lenin was right. There is no subtler, no surer means of overturning the existing basis of society than to debauch the currency. The process engages all the hidden forces of economic law on the side of destruction, and does it in a manner which not one man in a million is able to diagnose." - John Maynard Keynes

Karl Marx described in his 1848 Communist Manifesto the ten steps or 10 Planks of Communism, necessary to destroy a free enterprise system and replace it with a system of omnipotent government power, so as to effect a communist socialist state. Sadly, today most Americans practice these 10 Planks of Communism instead of their own Constitution or the 10 Commandment model outlined in the Hebrew and Christian scriptures.

In 1934, the Frankfurt School moved from Germany to Colubmia University in New York City and was renamed Studies in Philosophy and Social Science. This Marxist organization began its efforts in spreading its critical theory in America that seeks "to liberate human beings from the circumstances that enslave them." Its target - Capitalism. It's methods - Cultural Marxism.

A Marxist/Leninist cultural revolution is taking place today in American universities where Marxism is alive and well. U.S. News and World Report reported that there are ten thousand Marxist professors on America's campuses. Georgie Anne Geyer says that "the percentage of Marxist faculty numbers can range from an estimated 90 percent in some midwestern universities." ["Marxism Thrives on Campus," The Denver Post, Aug. 29, 1989]

The field of American history has come to be dominated by Marxists and feminists according to Dr. Arnold Beichman and Professor John P. Diggens. [Accuracy in Academia Campus Report, July/August 1987] Self-declared Marxist historians, Eugene Genovese and William A. Williams were elected president of the Organization of American Historians in successive elections, and Louis Kampf, a radical with Marxist predilections, was elected president of the Modern Language Association. [Herbert London, "Marxism Thriving on American Cmpuses," The World and I, January 1987]

Many Christian groups have combined their Christianity with Marxism, sometimes referred to as the "Christian Left." The World Council of Churches has been described as "an instrument of Soviet policy since 1966." In America, the Maryknoll priests, the liberation theologians, Episcopal and Methodist groups and Jesuits have been active on the side of communist insurrection. [David A. Noebel, Understanding the Times, 1991.]

U.S. President, Barack Obama has openly embraced Marxism, filled many of his cabinet posts with Marxists, and has pushed his 21st. Century version of Marxism on the American public. He signed into law in 2010 a major Socialist victory in the Affordable Care Act, or better known as ObamaCare. He plainly asserted his hatred of capitalism when he declared, “You did not build that yourself.”

In 2016, self-described Democratic Socialist Bernie Sanders blazed upon the world stage as he ran for President of the United States with a openly socialist agenda. Surprisingly he garnered a huge following of supporters who apparently did not understand the agenda they were supporting... or sadly, perhaps they did.

Time magazine's Man of the Decade for the 1980s, Mikhail Gorbachev, remains a staunch Marxist/Leninist: "The works of Lenin, and his ideals of socialism remain for us an inexhaustible source of dialectical creative thought, theoretical wealth and political sacacity," Gorbechev said. [Mikhail Gorbachev, Perestroika: New Thinking for Our Country and the World, 1987] "Those in the West who expect us to give up socialism will be disappointed.... I ... hold a firm trust in socialist democracy and socialist humanism." ["In His Words," U.S. News and World Report, Nov. 9, 1987.]

Paul then stood up in the meeting of the Areopagus and said: “Men of Athens! I see that in every way you are very religious.
For as I walked around and looked carefully at your objects of worship, I even found an altar with this inscription: TO AN UNKNOWN GOD. Now what you worship as something unknown I am going to proclaim to you. - Acts 17:22-23

Just Weights and Measures
God commanded we have just standards of weights and measures. In the absence of just standards, there can be no confidence in honestly dealing with one another.